Article: “Is this a hair dye or heukchae?” The identity of Trump’s lawyer’s “black sweat“

Former New York Mayor Rudy Giuliani, the private attorney of US President Donald Trump, is in the spotlight after a press conference alleging fraud at the presidential election. Controversy arose over whether the source of black sweat dripping down his face was hair dye or mascara.

Netizens who saw the “black sweat” dripping down the sides of his face during his press conference deduced that “Giuliani is a victim of the side effects of dye caused by bright lights. Many speculated that the source of the black sweat was dye and drugs”

Beautician Mirko Bergani stated to NYT, “It is more likely that his sideburns were drawn through mascara or correction pen (rather than dyeing) that got mixed in with his sweat. Since his sideburns are grey, he probably corrected them with some mascara to make it look natural. The part where his sweat is dripping looks heavy. I think he overused the product. That’s why (dark sweat) started flowing down. Whoever wants to avoid what happened to him should avoid hot rooms/days and wait for makeup to dry completely.”

On the other hand, some hairdressers claim that speculations of hair dye are correct. Stylist Jean Charsinello said, “If you don’t wash off the dye properly, it may run off. I don’t know exactly what he did on his hair but he was definitely using something.”

Giuliani did not respond to NYT’s request for comment. 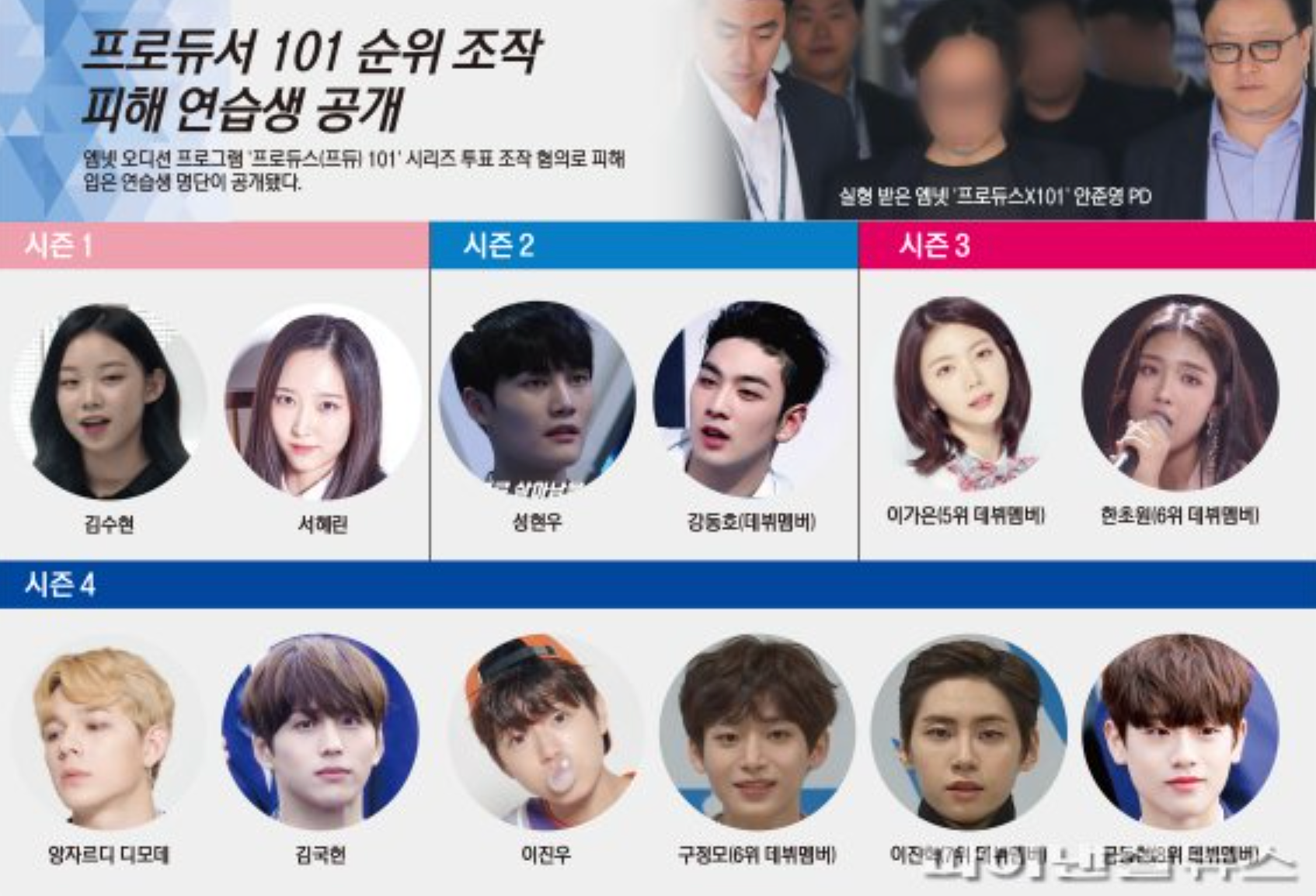 The full list of trainees that were victims of Mnet‘s vote manipulations in ‘PD 101‘ were as follows: Big Bang Seungri‘s witness that attended his trial in military court has reversed his statements.

His acquaintance, former Arena Club MD Kim attended as a witness at Seungri’s third hearing held at the General Military Court in Yongin, Gyeoggi on the 19th and reversed his statements.

In the first trial, Seungri had denied all 8 charges stating “he had no incentive to arrange sex trafficking” and stated that “Yoo In-Seok was not involved in the prostitution ring.” He also denied gambling charges stating that “he visited the U.S to carry out scheduled schedules and not to gamble.”

In the third trial held that day, MD Kim also denied charges of arranging prostitution for Seungri stating that “he arranged for prostitutes under the direction of Yoo In-Seok, former Yuri Holdings CEO.” He stated, “I followed Yoo In-Seok instructions and introduced the women and drove them in my vehicle as I was told.”

As for the reason why he followed instructions he stated, “I did it because I had no money and wanted to look good in front of Yoo In-Seok. I wanted to show him I was working hard as an MD.”

Regarding allegations that Seungri arranged for prostitutes for a group of Japanese businessmen several times in December 2015 he stated, “I don’t remember the details but I saw Yoo In-Seok having sex with a woman with the door open. I’ve never seen any footage of Seungri having sex or doing illegal filming.”

Jung Joon Young, Yoo In Seok and three women (prostitutes) that participated in the sex trafficking as scheduled to appear as witnesses in the hearing on the 20th (next day). 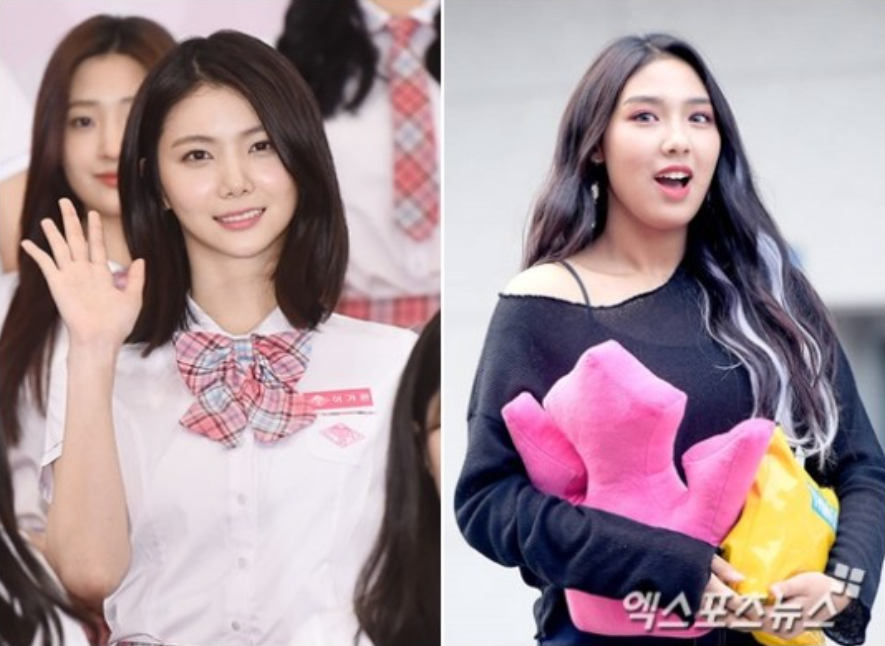 Article: “I was a member of IZ*ONE”… Interest towards Lee Ga-eun and Han Cho-won whose lives changed because of Mnet’s manipulation

Attention is focused on Lee Kaeun and Han Chowon who were eliminated on Mnet‘s ‘Produce 48.’

On the 18th, the Seoul High Court sentenced Ahn Joon Young PD and Kim Yong Beom CP who were suspected of fraud for manipulating the rankings of Mnet’s ‘Produce 101‘ series to 2 years and 8 months in prison, respectively, while also disclosing the list of trainees who suffered from their manipulations to ensure smooth compensation for the victims.

The following trainees were rigged out out ‘Produce 101’ as follows:

Season 1: Kim Soohyun and Seo Hyerin were eliminated in the 1st round of voting.

Season 3: After School‘s Lee Kaeun and Han Chowon were eliminated in the fourth round. 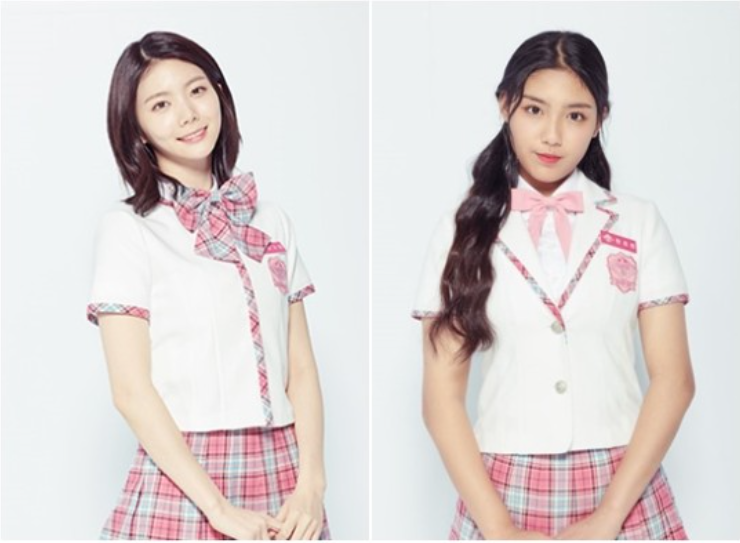 Among these trainees, Lee Kaeun and Han Chowon are receiving the most attention as they were eliminated despite receiving high rankings in the final debut vote. Lee Kaeun was heavily promoted in the program as she was a trainee with “6 years and 11 months” experience even before the first broadcast and as the program progressed. The former After School member was determined as this was her “last opportunity” to make it and ranked at the top in all episodes except the final episode.

However, it appears that she was eliminated through rigged votes in the last live broadcast even though she had placed 5th in the final debut votes.

Since the victims were revealed, IZ*ONE’s comeback is receiving unfavorable attention as the group has expressed willingness to push forward with activities despite riggings being exposed in the group. Criticism of IZ*ONE’s activities is expected to continue as the list of victims, which has been led only by speculation previously, has now been revealed in court. 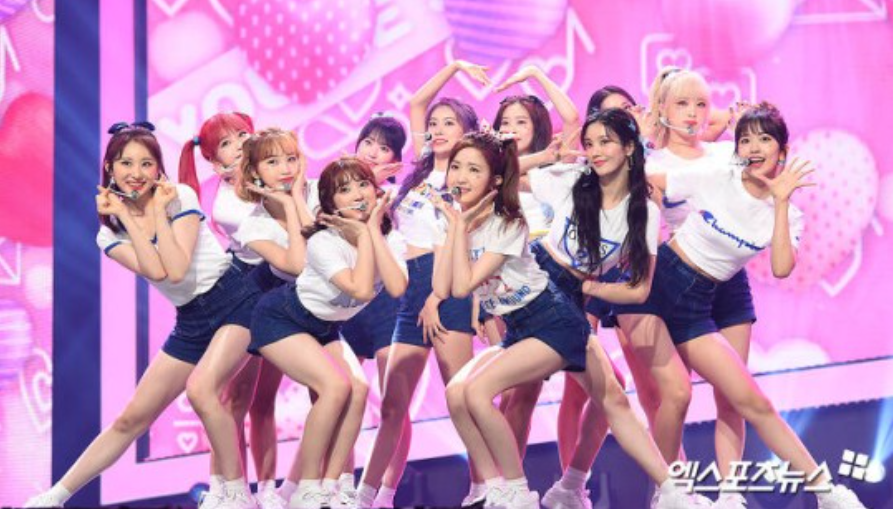 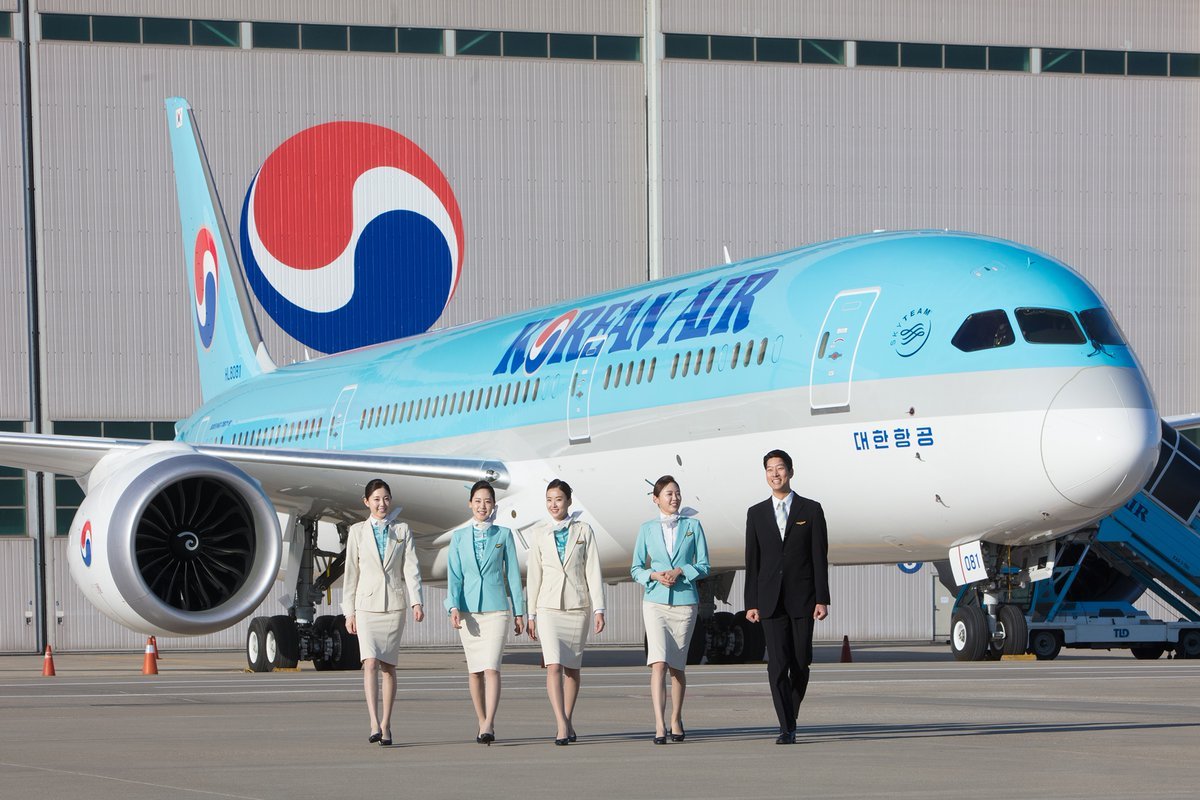 An investment bank industry official revealed on the 12th that “Korean Air is considering acquiring KDB Development Bank and Asiana Airlines and plans to submit a letter of intent to Asiana as early as next week.”  If Korean Air’s acquisition of Asiana is successful, it’s expected that a mega-national airline will be born.

Creditors believe that it won’t be easy to turn around Asiana Airlines and its expected that they’re pursuing a plan to merge with Korean Air.

Rumors of a merger are due to growing concerns about the company’s ability to stay in operation due to their reliance on transfusion of funds from their Infrastructure Stability Fund. 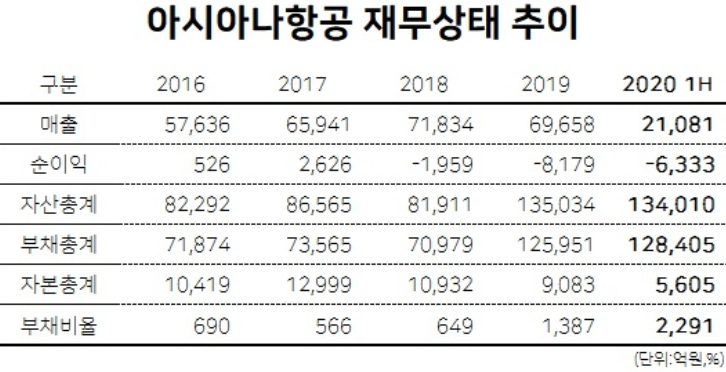 Kang Daniel and TWICE Jihyo have reportedly broken up after 1 year of dating.

The two met through introduction by an acquaintance in 2018 and began dating in August of last year.

Close aides confirmed to Dispatch regarding the reason for their break up stating, “Both of them had clear goals. As he focused on his new album, the met less and less and recently decided to break up. I think work was more important to him.”

In the meantime, Jihyo is currently promoting their new album ‘Eyes Wide Open‘ and have captured iTunes charts in 32 countries with their new song ‘I Can’t stop Me.’

Kang Daniel is currently working on a new album. On the 6th, Byun Min-sun, a senior judge at the Seoul Central District Court held a series of hearings against the former agency CEO Kim Mo (51) for perjury. The judge accepted Kim’s request to provide witnesses and he chose the Korean Hotel President and TV Chosun CEO who will be questioned at a hearing scheduled at 4pm on the 11th of next month.

Kim Mo attended trial in November 2012 as a witness for defamation charges against Lee Jong-gul, a Democratic Party lawmaker, and falsely testified that “he didn’t know about any personnel of the Chosun Ilbo and nor was he present at the drinking party in question.” The prosecution believes Kim introduced Jang Ja Yeon to TV Chosun CEO Bang who he had met in October 2008. Kim also stated that he had never assaulted Jang Ja-yeon or any other celebrities.

Earlier in May 2019, the prosecution’s past affairs committee under the Ministry of Justice announced results of its investigation into the late “Jang Ja-yeon list” and recommended that the prosecution investigate Kim Mo on charges of perjury. Prosecutors indicted Kim without detention on charges of giving false testimony with his past statements after investigations into various witnesses.

However, charges of whether he forced sexual favors on the late Jang Ja-yeon were not included in the indictment as the statute of limitations had expired. 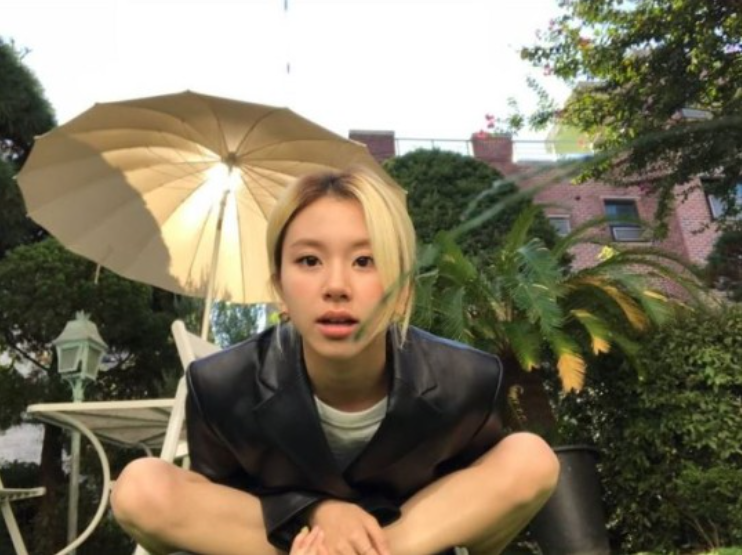 TWICE‘s Chaeyeong is caught up in alleged dating rumors.

On the 6th, photos of the TWICE member allegedly on a date with a tattooist were circulated online.

Netizens claimed Chaeyoung was in a romantic relationship with tattooist Chim Hwa-sa and had even traveled to Paris together sharing photos of the couple shopping and out and about matching hats.

Netizens also claimed that the two were wearing couple rings on their left ring finger and that Chaeyong’s younger brother was also reportedly following him on SNS.

In addition, photos of Chaeyong and Chim Hwa-sa on a shopping date together at a large supermarket further solidified rumors of a romantic relationship between the two.

Tattooist Chim is reportedly in his early 30s. 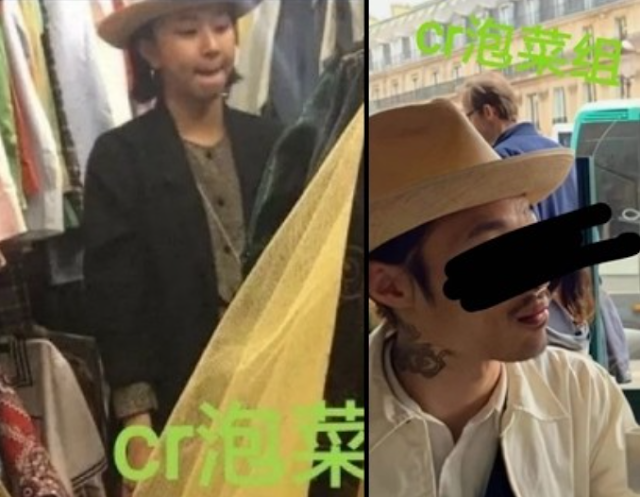 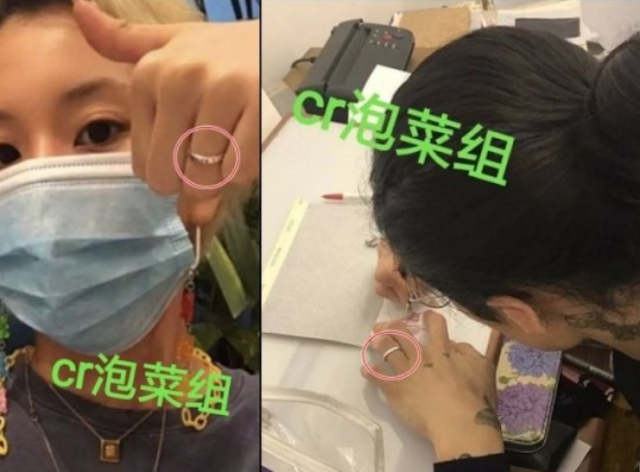 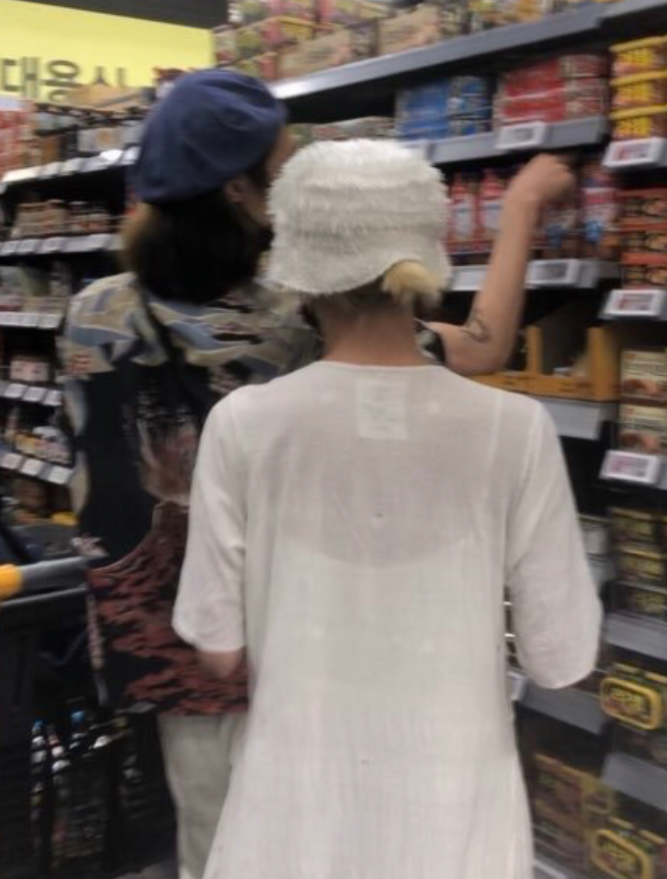 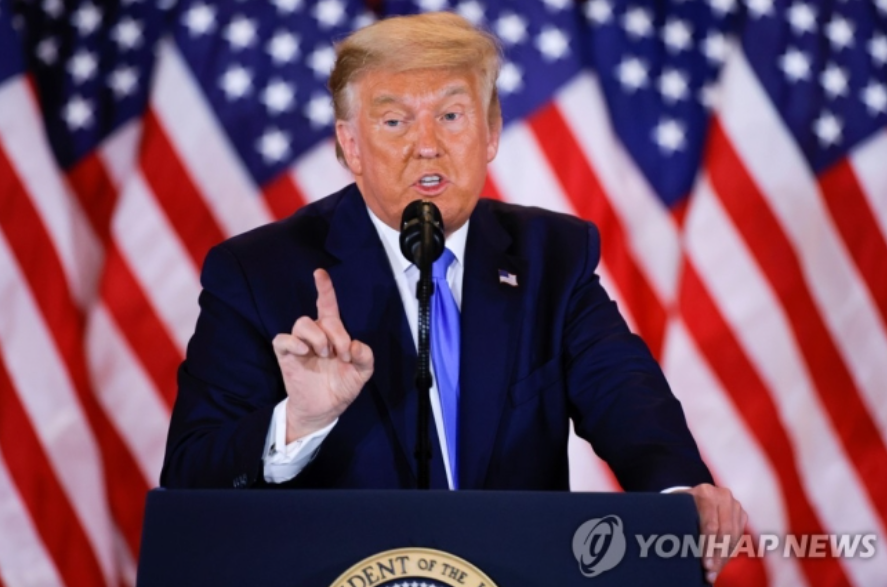 President Trump has filed lawsuit to suspend all vote counts and is demanding a recount.

According to report by Reuters and Associated Press (AP), an official from Trump’s side stated, “We have filed a  lawsuit in a Michigan court requesting that the counting be suspended until meaningful access is granted. We also called for a review of ballots that have been opened and counted.”

Trump dominated the early vote counts but has since dropped with Biden leading the count in the state with 49.5% of the votes to Trump’s 48.8% according to the Washington Post.

A total of 270 electoral votes is needed to win the White House. 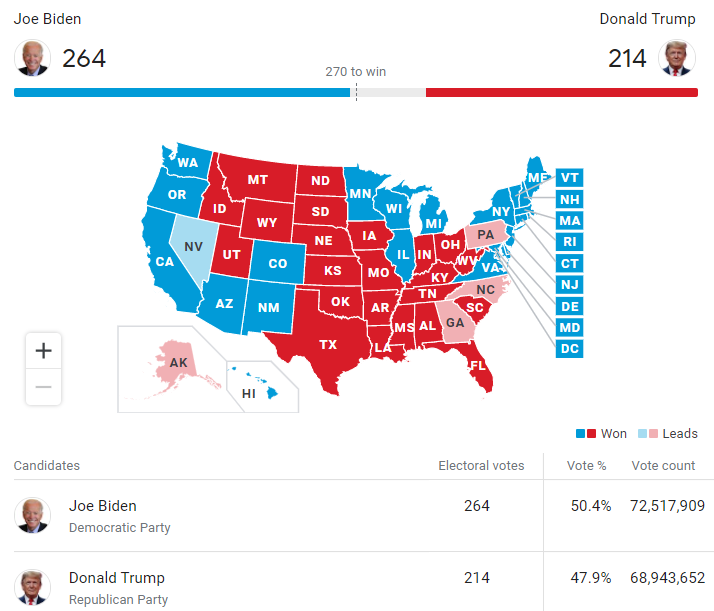 On the 3rd, Supreme Court Justice Park Jeonghwa rejected his appeal and affirmed the prior court’s ruling of 2.5 years in prison with three years probation.

Kang initially admitted to the quasi-rape charges during first trial stating that “he had blacked out.” However, after his appeal to the Supreme Court, he denied the charges with Kang’s lawyer arguing that “no semen [DNA] could be found in victim B’s body.”

Regarding discovery that his DNA was found on A’s sanitary pad, his lawyer speculated that the “DNA seems to have shifted in the process of using Kang’s clothes and items after A showered at his house.”

The Supreme Court Justice stated, “the fact that A consistently recounted Kang’s behavior at the time of the crime, feelings felt by the victim and that he woke up right after he assaulted her, his handling of the crime afterwards supports Kang’s initial admission of forced sexual harassment. It’s difficult to reject the credibility of his statements just because the victim received a large settlement from Kang after the rape. There is no issue with the original ruling that Kang is partly guilty of quasi-rape.”

In the meantime, Kang Ji-hwan was accused of sexually assaulting and forcibly molesting two drunken female staff at his home but katalks and CCTV released appeared to show that victim A showered and wore Kang’s clothes afterwards. The victims also appeared to walk around freely around his house.