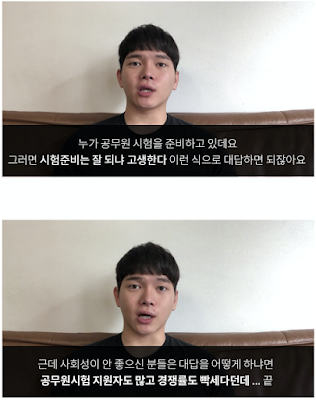 Let’s say I’m preparing for exams to become a public servant. You could tell me, “How’s your studying going? You’re working hard.” But those with bad social skills would say, “I heard that there are a lot of applicants for public servant exams and it’s really competitive…” and that’s it. I could only think, “So what? Are they trying to comfort me or are they being sarcastic?” Like I said, they could just ask me about the studying and tell me to work hard. But they say weird things.

Another example would be that I’m staying up all night to study for the exams. You could tell me, “Work hard, good luck.” Instead, socially-inept people would say, “Hahaha, my friends end up falling asleep though…” I don’t know what they want when they could just tell me to drink coffee and not work too hard but instead tell me that their friends fall asleep.

When you speak, please make it precise, short, and accurate for the other person. You say things that makes the other person confused. Make the meaning clear so that the person can understand whether you’re cheering, worrying, or looking out for you.

1. [+99, -2] I really agree… I can’t understand whether they’re being sarcastic or not, it’s frustrating. There’s so many people like this, especially men.

2. [+80, -4] Those who make everything about themselves. “I ate pork cutlet!” “I also ate it a few days ago. I wanna travel.” “I’m traveling next week!” There’s always these people who only want to talk about themselves. They look socially-lacking and stupid.

4. [+26, -0] There’s a lot of women like this, too. I would listen to 100 concerns of hers and be empathetic. When I finally tell her my one concern, she would answer, “Hm… I don’t think so…” That’s the end of the conversation. It’s like the part of empathy in their brain is broken.

“I’m preparing for exams to become a public servant.” “So what?”

These are things that the other person don’t have much to answer to. It’s hypocritical to expect empathetic answers.

6. [+24, -0] If these things make you say “so what”, you could also say everything people say can be answered with “so what”. If you want to talk to someone, it’s a right manner to make your answer according to what the other person is saying. Who would want to talk to you if your answer to them is “so what”? If you ask your friend “The weather’s great, isn’t it?” and they say, “Duh, the sun is up. Of course the weather’s good.” You wouldn’t want to talk to them again.

8. [+11, -0] Those with bad social skills seem to be negative about everything. The problem is that they don’t seem to know what’s wrong with them and call the others weird. They don’t realize that they’re the weird ones ㅋㅋ