Pann: A celebrity parks illegally all the time, so upsetting


There’s an actor who lives in the apartment next to mine. He just started to become popular from a variety show. He rides a van. There’s a parking lot with lots of spaces but he parks right in front of the apartment all the time so that he can ride easily. Because of that, we hear drivers honking angrily and almost get into car accidents. I tried to leave a message but there’s no phone number on the car. I called his agency but they don’t pick up the phone. Maybe I’ll post on his DC Gallery. Or I should report to the news or reveal his name here. It’s so frustrating. This is the proof picture, I covered the plate number. 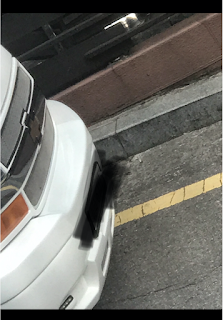 1. [+93, -0] It’s the same type and same color of the van from I Live Alone. And if he’s an actor who just started to become popular from a variety show, I can’t think of anyone else besides the actor on I Live Alone.

2. [+81, -2] I can tell who this is. If it were me, I would leave a memo that says, “Do you realize that your illegal parking is almost causing accidents? There are many complaints about it. Being a celebrity doesn’t make you any special. What are the residents supposed to do when you don’t even leave your manager’s phone number? I’m leaving this memo because I couldn’t even contact your agency. If this happens one more time, I’ll publicize it on the Internet or by journalists. Just like how you were picking up the garbage in front of cameras, please have some basic manners in real life, too.”

3. [+76, -3] If he’s indeed the actor from I Live Alone, I’ve always disliked him because I could see that he was trying to look cool and cared about his image so much. He looks fake.

4. [+59, -6] Honestly, I found Sung Hoon likeable when he was on I Live Alone with his personal trainer and doing triathlon. But as time passed, I could see that he was acting fake. His vibes changed and his modest attitude seemed to be disappearing. His fans will call it a hateful comment but it’s my opinion.

5. [+58, -1] I’m not joking. You should reveal his name and make it controversial to make him apologize and wake up. Seeing how he’s doing this when he’s just starting to rise, I can tell his character. He won’t last long.

7. [+47, -2] If this is indeed Sung Hoon, does he even have a good image to begin with? When Sung Hoon went to a convenience store after exercising on I Live Alone, the ajumma asked him if he just came from exercising. He then said randomly, “I went to see my grandmother” and left without looking at her. I found his personality questionable. If he meant it to be funny, it wasn’t funny at all.

10. [+32, -4] If it’s indeed the celebrity that everyone’s talking about, I’ve always disliked him. I really don’t like the vibes from his eyes. I can’t describe it in words but they look dark and cold? It’s my personal thoughts. He’s becoming popular these days but I don’t know why. How is he rising from a variety show when he’s not even funny?